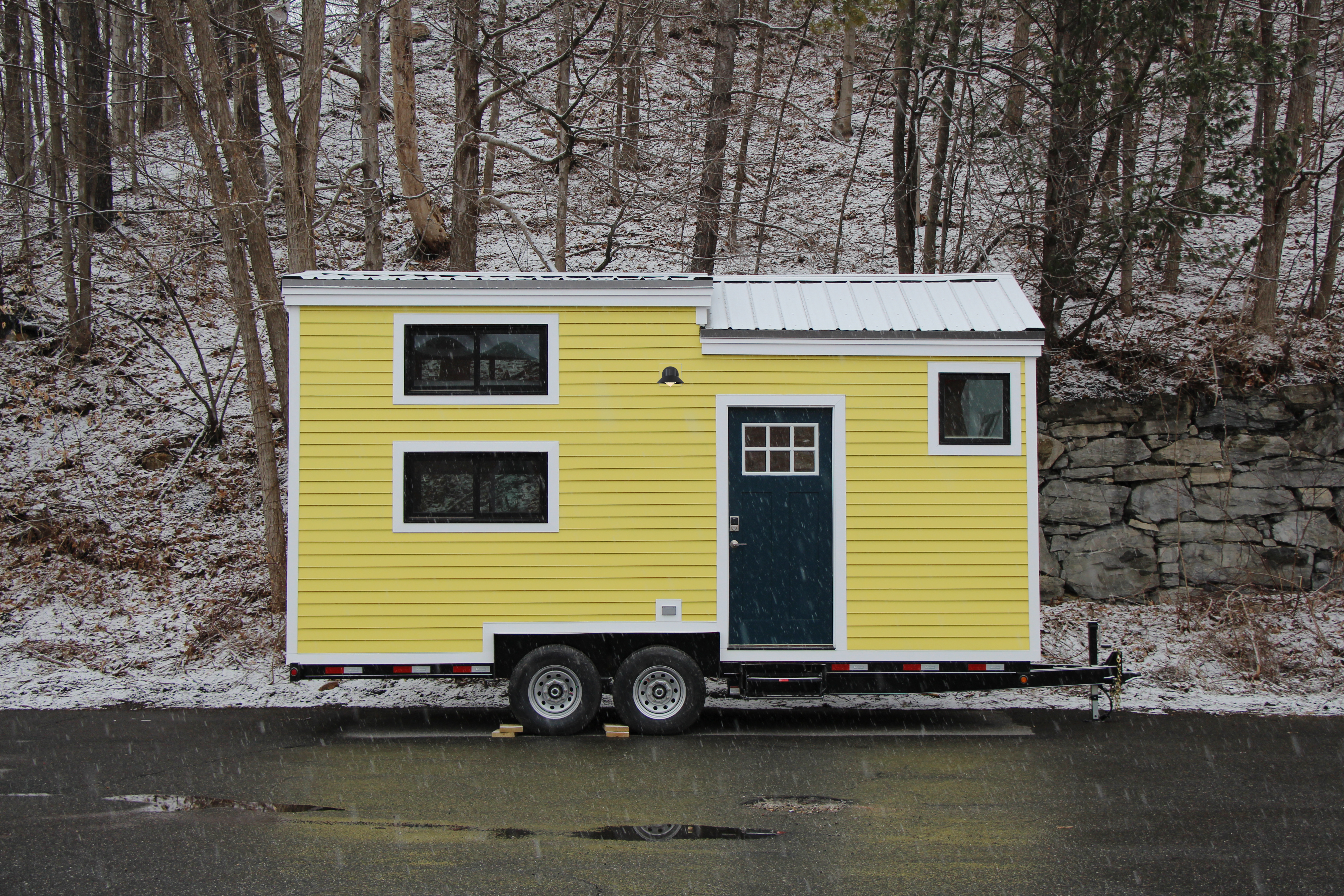 B&B Tiny Houses are built in the Berkshire Mountains of Massachusetts, near the borders of Vermont and New York.  Our tiny houses are named after nearby natural features.

The house’s names are categorized by their roof shapes.

Tiny houses with double-pitched roofs are named after rivers, creeks, and springs.

A double-pitched roof has its peak in the middle.

The Hudson Tiny House is named for the Hudson River.  It’s our lightest tiny house and the best suited for travel.  The Hudson was originally known as Muhheakunnuk, or “Great Waters Constantly in Motion”.

The Hoosic Tiny House’s design was based on the Hudson, with an added loft.  The tiny house is named for the Hoosic River, which winds off the Hudson through the Taconic Mountains of New York, the Green Mountains of Vermont, and the Berkshire Mountains of Massachusetts, eventually passing right in front of B&B’s tiny house workshop.  The name Hoosic is spelled in various ways: “Hoosick”; “Hoosac”; but we decided Hoosic was the most phonetic way of spelling it for our customers who aren’t from around here!

The Kinderhook Park Model Tiny House, which is the oversized version of the Hoosic Tiny House, is named for Kinderhook Creek, which also winds through the Taconic Mountains. 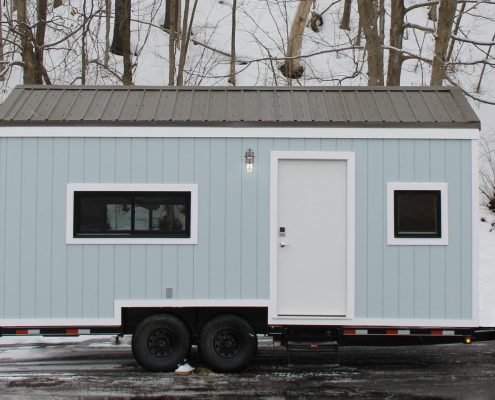 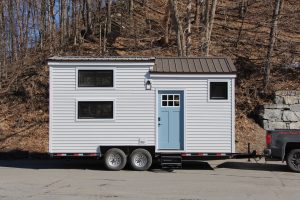 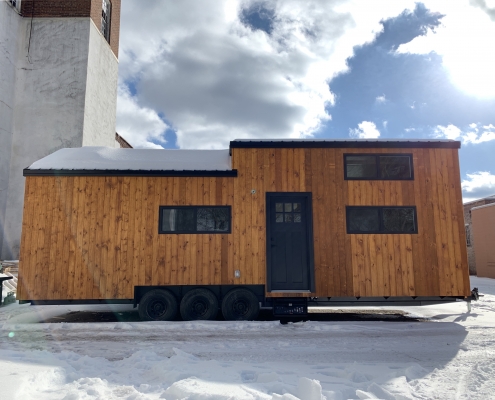 From left: the Hudson, the Hoosic, and the Kinderhook

Tiny houses with single-pitched roofs are named after mountain ranges and mountain features.

A single-pitched roof has its peak at one side or end of the house.

The Ampersand Tiny House, in our portfolio of past projects, is named for Ampersand Mountain which towers above Saranac Lake in the Adirondacks.  The house has two sleeping lofts, hence the &.  The house’s name is also a nod to the ampersand in the B&B logo.

The Taconic Park Model Tiny House is named for the Taconic Range, which is in turn part of the Appalachian Mountains.  The name “Taconic” means “in the trees”, and the house indeed serves as a forest retreat cabin for its owner.  Additionally, the Taconic Range is a thin strip of mountains stretching all the way from our corner of Massachusetts to down to Westchester County, NY; three of our employees split their time between these two places, traveling up and down the Taconic Parkway.  Like the Hoosic, there is more than one way to spell Taconic, but “Taghkanic” does not make our spell checker happy! 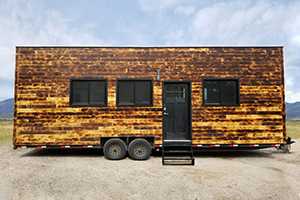 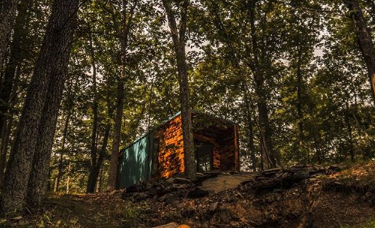 From left: the Stony Ledge and the Taconic

Our other tiny houses have unusual rooflines.  These houses are named after lakes and ponds.

A butterfly roofline is double pitched, but its peak is the lowest, rather than the highest, point of the house.  Clerestory rooflines have vertical windows high up to let the light in.  A gambrel roof has multiple slopes, usually 4, like a barn.

The Silver Lake Tiny House’s unique butterfly roofline called for a beautiful name.  Silver Lake recreation area in Pittsfield was once blighted by nearby manufacturing, but was dramatically cleaned up by conservation efforts in the early 2010s and is now used for fishing, kayaking, and walking.

The Spectacle Tiny House (under construction as of March 2019!) is named for Spectacle Ponds (Upper and Lower) in Otis, MA.  The two ponds, together with the brook between them, resemble a narrow pair of old fashioned specs.  The Spectacle Tiny House was built as a guest house and tennis viewing house.  The large windows on the higher side of the house’s asymmetrical gambrel roof offer a view of the tennis courts and the valley below: quite the spectacle! 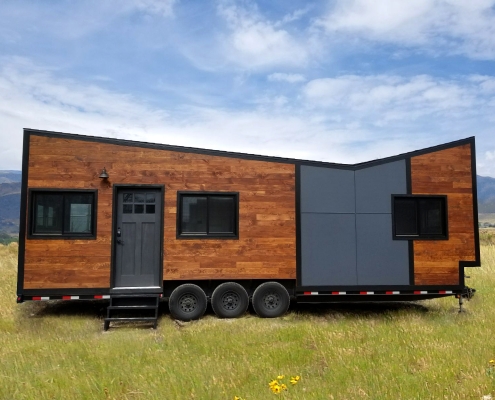 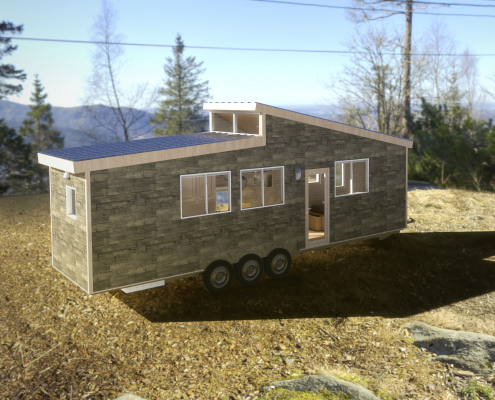 From left: the Silver Lake and the Ashmere

Check out our Tiny Houses